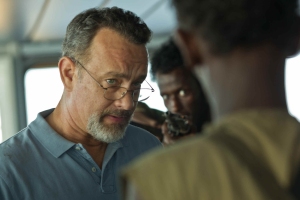 When I first saw the trailer for ‘Captain Phillips’, I was intrigued, not only because it was based on a true life story that captured my attention a few years back, which I’m a little bit sad to admit sparked that sense of awe when you hear a good military story, but I was also interested to see the film due to the talent both in front of the camera, and behind it.

The third thing that got my attention though, and for the wrong reasons, was the title, which I can understand to a point why they called it that, but overall it just didn’t do it for me, but hey, if the quality of films were based on titles alone, then we wouldn’t have classics such as ‘Robocop’, and the last film I reviewed, ‘The Princess Bride’, both of which are terrible names for a film to be taken seriously.

So with an interesting true story as the narrative, which I’m always a sucker for, Tom Hanks in the lead, and Paul Greengrass directing, from ‘The Bourne Supremacy’, and ‘The Bourne Ultimatum’ fame, made for a tantalising piece of cinema, and even more so when the trailer showed the second lead performance of newbie, Barkhad Abdi, might just steal the show from hanks, and I always love a good scene stealer.

The film itself was a solid cinematic experience, with Greengrass’s usual unique style of directing, and also Hanks typical likeable and relatable delivery of his performance, but what interested me more was the story behind the story, which I felt didn’t got enough attention, and that was the story of the pirates themselves. 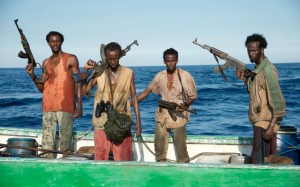 I mean, even if you don’t know what happened in the true story, I’m sure you can figure out for yourselves what happens in the end, and that ending gave me a feeling that I’m not 100% sure was the desired feeling the filmmakers hoped to impart on the audience. And let me tell you, it was a not a ‘merica, fuck yeah’ kind of feeling, or ‘I’m glad it all turned out happy for the white westerns in the end’. Instead, it was sadness for once again the untold story, and that’s what got the pirates there in the first place, and what now for them.

Though I’m not idealistic enough to make that a bigger issue than it needs to be, as this film was telling a different story, and it can’t be attacked for taking that path, just like ‘Star Wars’ can’t be attacked for not telling the untold story of all the innocent workers plying their trade upon the Death Star under construction, and who perished horribly when attacked by the Rebel scum…but I digress.

So, if you watch this film you’ll see some great directing, some brilliant performances, an attempt at a fair and unbiased storytelling narrative, but deep down I think most people will walk away not pumping their fists in the air at the ‘happy ending’, but might just hold their heads in shame at the state of the world. But hey, maybe that’s exactly what the film was trying to imprint onto us, and if so, they are fricken geniuses, as the ending wasn’t constructed to be that way, or at last in my eyes it wasn’t.