There have been so many damn top selling teen book series turned into movies over the last few years, from the successful adaptations of Twilight and The Hunger Games series, to the not so successful conversions that are far too numerous to name, or maybe I just don’t remember them as I didn’t see them as I had no interest to. But one adaption that took my interest was for Ender’s Game, as I love me a bit of sci-fi fantasy, and this looked like it could at the very least be a decent film.

It did help that the film had some great actors in the cast, from Harrison Ford, Gandhi…I mean Ben Kingsley, Viola Davis, and the up and coming top kid actors Abigail Breslin, and the title character lead actor, Asa Butterfield from the awesome 2011 Martin Scorsese film, Hugo. With such a strong cast, you can’t help but feel not all of them would decide to make a dud film, meaning this was bound to at least be a decent script for them to accept to be in it, though having said that there are often cases where a great script is butchered by the people making it.

As I entered the cinema though, and seeing as this film has only been out in New Zealand for 4 days, I was very surprised to see a 6.10pm Tuesday night screening empty. Not that I was complaining, as I love empty cinemas as it feels like I rented the place out for the price of one ticket. Alas though, one other person did turn up just before it started, and the sucker sat right in front of me in the next row down. Cheers buddy! Though with that out of my head, I sat back and hoped to at least see a decent film, though was prepared for it not to be anything more than that. 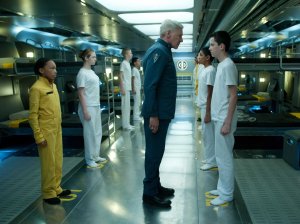 And well, I fricken loved Ender’s Game! What I thought just looked like a typical teen angst ridden fantasy adventure, instead had so many layers to the story, including actual real and complicated characters with meaningful motivations, that it just drew me in, very deep. Yes, there was some clunky acting and directing elements at times, but those were few and far between, and in no way did it get in the way of my enjoyment. And yes, the writer has some very strong opinions that go against my beliefs, but once again, and though I could go into great detail about my views on that, it also didn’t obscure or blind me to how good this film is and the story at its centre and its deeper message.

I also want to get one thing clear. This is ‘not’ a teen flick, this is a genuine adult movie with teen characters, and for me it worked seamlessly that way. Though sadly it looks like there won’t be a sequel due to the poor box office, but it wraps it up well enough for me to love it as a standalone film, though it does almost make me want to read the books…almost.