Before going into Bad Neighbours, it had a fairly decently mixed reputation, from people saying it’s one of the funniest comedies of the year, to it’s helping incite male violence against women. So to say I wasn’t exactly sure what to think when going into it was an understatement.

Though I’m not the kind of guy to look at things that happen in real life and quickly try and point the finger for their causes at films or the filmmakers, especially when I feel the real causes come from a much bigger and deeper issue. So I still went into this film hoping to see a silly and funny comedy, and was more than happy to take along my girlfriend without any of the associated fears people have been laying upon the film, or films like this.

The film itself was a mixed bag, as it had some of the jokes fall flat or only be slightly funny, a decent chunk were fairly solid, and a few that just had me laughing out loud. So when your film is a comedy, that’s a good hit rate, and so it did its job right and was damn enjoyable and funny. 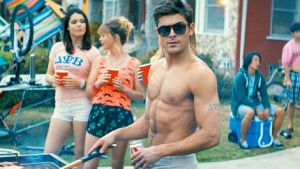 The premise was a little far fetched in places, but sometimes with these films you ignore those plot holes, even if they do try to fill them with half assed excuses and reasons for the story points. The acting was good, the directing stock standard, and the writing was decent enough, so all up this was a damn good comedy that sits a little bit above average and would be one I’d happily sit down to watch again.

As for the controversy around these types of films? Well, that’s for a whole other article and maybe a whole other place, but for now I’ll just say nothing is black and white in this world. If we start pointing the finger around us to find blame, you might just find that finger being pointed right back, maybe at you, or maybe at the things you love. So just be mindful of that.