As today was going to be mostly a day off, as the next leg of the trip didn’t technically kick off till 6pm orientation, meant we had most of the day free to do what we felt like. We were going to do the Cu Chi Tunnels, which was a Vietcong base during the war and consisted of over 250km of tunnels, and it was at minimum a half day trip that left at 8am, so we set our alarms at 6am. At 2am though I woke up and I couldn’t shake the feeling we should skip those tunnels, so I changed the alarms to 7am and went back to bed.

When we finally woke up Mollidy was glad for the extra hour sleep, as was I, and we got up, showered, changed, and headed off for breakfast. 6 of us headed off for breakfast at Starbucks of all places, as 3 of them were flying out that day and had to leave in a couple hours, so they wanted that Western hit just before heading off. The food was pretty average, and before we knew it we were saying our final good byes to those 3, plus two others from the group who also joined us later on.

After that Mollidy and myself headed out into the city, and this is where the app Triposo came in very handy, as we just typed in the Reunification Palace and it gave us an easy to follow map right to where we needed to go. So instead of stumbling around with a map looking like tourists, we instead were able to walk a few blocks, have a brief look at my phone, and then get straight back into it. So easy!

As we were nearly there though, we got hit by our first decent scam, and one that we actually laugh at as it was so well done, and I even happily give the guy props for pulling one off so well. We call this the Coconut Scam. We were walking down the street, and a man carrying a large load over his shoulders between two poles crossed the street and walked a little bit in front of us. He then slowed just enough that we almost bumped into him, and he said sorry, in near perfect English.

He then asked if we were going to the Palace, which we said yes, and he politely told us where to go and also how to get to the war museum, and then he said it was good to meet us, said goodbye, and he started to walk off. He then slowed down again a short time later and asked where we were from. Normally we know this as a way for them to get you talking to scam you, but he had lulled us into a comfortable situation that we didn’t even question it.

We said we were from New Zealand, and that Mollidy’s parents were Cambodian, and then he said what he was carrying was heavy and would we like to get photos holding it. We said yes, got a photo each carrying it, and before we knew it, he had bent down, grabbed a coconut from one of the two boxes he was carrying on the pole, and he asked me to hold it. He then quickly grabbed another, cut off the top, and handed that to Mollidy. That’s when we both realised what was happening and it was too late to go back.

He took mine and cut the top off, and then put a straw in each, and said 150,000 Dong, which is about $8 kiwi or $7.50US, which is easily 4 times what they were worth. Having been so caught up in a nicely executed scam meant we couldn’t really do anything else other than pay, as normally if you don’t agree on a price upfront you’re screwed. We paid up, said thank you, and we walked off, laughing and being annoyed at ourselves in equal measures, but it was a good lesson to learn.

The Reunification Palace itself was really odd, as it had pretty much been kept exactly as it had been when it was stormed by the North Vietnamese forces when they took over Saigon. So it was like stepping back in time to exactly 1975, but it was cool, and they had tanks, planes, and helicopters on the grounds that all had a historical significance to the palace and during the war. After spending over an hour there, we headed off to the war museum which wasn’t too far down the road, and on the way we had two coconut guys try the same thing, but being wiser we knew to stop them very early on in their spiel.

When we got there though we found they closed between 12 and 1.30pm, and seeing as it was just 12, we had 90 minutes to kill. We weren’t that hungry, so we walked around for about 20 minutes looking at places, and there were no sights to see according to Triposo as we were at the most northern point of such places already, so we decided to go and find a place we could relax in the air con for an hour before heading back to the museum.

As we walked we came across a KFC, and seeing as we hadn’t eaten anything like that since the trip started, we thought why not give it a go. It was ok, and just like KFC back home but a bit different, but it gave us time away from the heat which was the main thing. Once back out on the street we headed to the war museum which ended up being a pretty hard place to look through.

The first part were tanks, planes, and guns, so being a boy and someone who loved war films meant this part was cool to see, but then the real stuff started to kick in. First the tiger cages where North Vietnamese prisoners were kept, and that was pretty full on. Though when we were in the display, which is a building outside the main complex, we thought there were sparrows flying around the room, when suddenly we realised they were bats. We had never seen bats in the flesh, let alone having them fly around us, so that was pretty cool.

After that we moved into the main building which was three levels of photos and displays about the war, and this was tough. The agent orange things especially got me pretty hard, and by the time we left, a good 90 minutes later, we were pretty quiet and reflective. We decided to walk back into the town to check out some markets, but stopped off at a nice little bar on the way to eat New Zealand ice cream and have a cold drink.

The first market we got to was called Ben Thanh Market, and we had been warned the day before by Jay that this market can be a little full on as the vendors will touch you and will almost force you to buy something. We had been to a lot of markets by this point, so we thought it would be fine, but by the time we had left the market, we would have had at least 100 vendors call out to us, some getting into our path on purpose to make us stop, and even a few trying to touch and grab us into their stalls, so that wasn’t a fun feeling.

We then headed off for Saigon Square, which was a more plush market with air con, and that was much nicer as no one hassled you, and Mollidy even tried to haggle for a few things but couldn’t get to a price she was happy with, so we ended up leaving without buying anything. After that we headed back to the hotel as orientation was going to start in just over an hour.

Orientation was a bit boring as most of it we had headed before, and was mainly for the 5 new people in the group, but it was still good to be part of it to meet the new Vietnamese tour leader, Bon, and the 5 new fellow travellers. New to the group were 1 German, 1 American, 2 Brits, and 1 Scottish lass, and we all went out for a dinner afterwards to get to know each other. The dinner was really nice, but a decent bit spicy, and we had Bon and two of the new members on our table, so that was good getting to know them.

During this meal though we found out one of our members from the first trip was wearing some sort of shoulder brace, and we asked what happened, and she said that a motorbike rider had tried to snatch her bag the night before and dragged her a couple of meters. Though the rider didn’t get the bag, it broke her collarbone, and so her trip was over, and the wheels were already in motion to fly her home for the surgery that was required. So that was both equally gutting for her and an eye opening story for the rest of the group.

We had been warned many times by Jay about bag snatchers in Vietnam, and of course Thailand and Cambodia, but you could tell some people just took it as stories, and that they must be rare. But for it to happen during our very first night in Ho Chi Minh and seeing the damage it caused showed this is a very real danger.

After dinner the group went their separate ways, and Mollidy and myself went and checked out a night market right outside the restaurant which kept us entertained for an hour or so, and then we headed back to the hotel for much needed showers, and sleep, as though the next day wasn’t an early start, it was still going to be the first full day of this leg of the Vietnamese part of the trip!

In this blog I want to touch on crossing the roads in these countries, but especially Vietnam where often if you wait for a gap, then you could be waiting a long time. So the best thing to do, and do this as a group or at least hand in hand with your partner if there’s more than one of you, is to look for a small gap, and just step out. Keep looking both ways, and just walk. Don’t run, what ever you do, as this will just freak out the drivers, but if you walk slowly, and stop where needed to let them drive around you, then you’ll have no issues, and you always get a sense of accomplishment crossing a road filled with heaps of cars, and hundreds of bikes, and you safely make it to the other side. 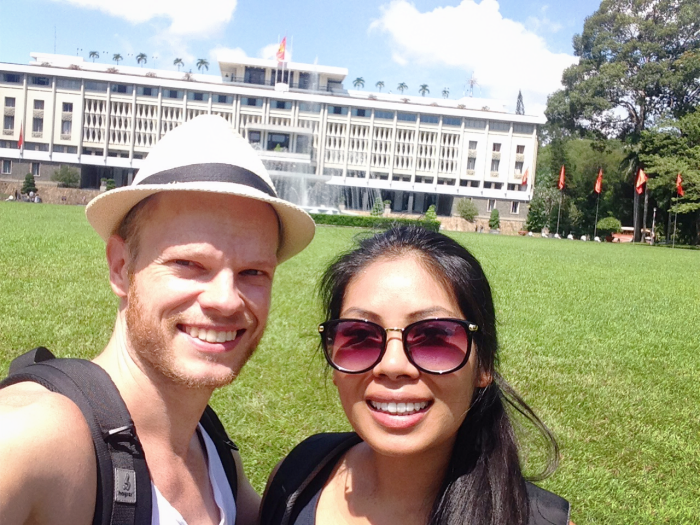 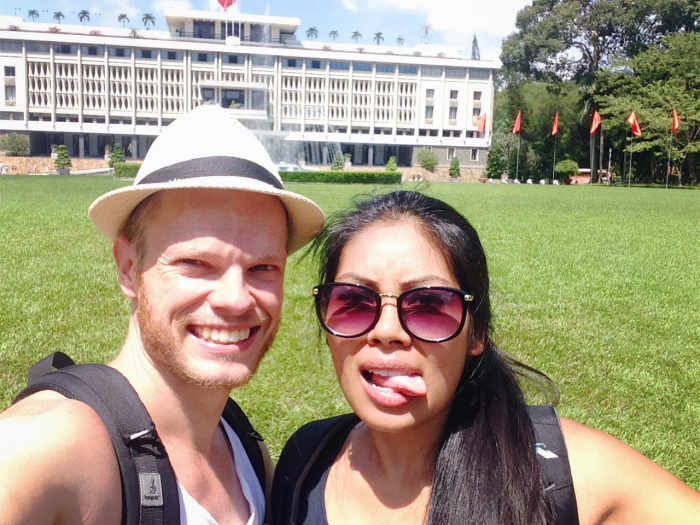 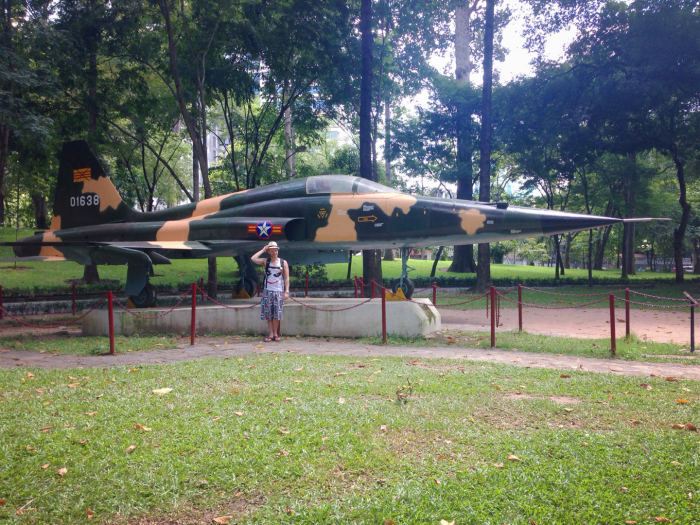 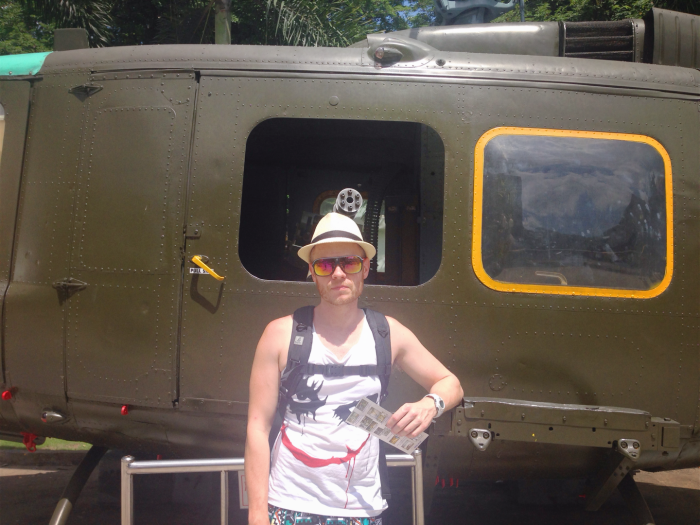 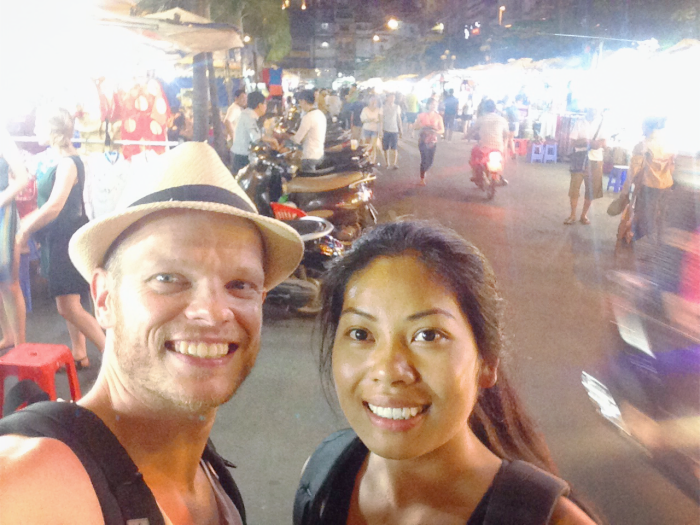