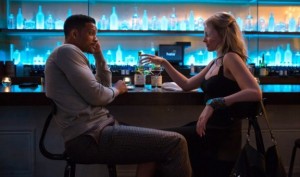 When I first saw the trailer for Focus, it didn’t exactly blow me away. The fact it had Will Smith in it was what really perked the interest, and with the rising star of Margot Robbie in the female lead, made it just that bit more interesting. So with tickets to the movies to use up, and with two other films I wanted to see not starting till later in the evening, I thought why not give this film a try, as you never know, it could have lead to a good surprise.

Well, it didn’t surprise me, or maybe it did? I kept expecting it to be a little bad here and there, and whenever it did, it was doing it for a reason and quickly pulled it back onto the straight and narrow. But that might also be one of the issues I had with the film, as it always seemed to be so well planned out, and ‘technically’ nothing ever went wrong the whole time. Also I felt like it was trying to be more clever than it actually was, and I wonder if I put my mind to it if there may be some big gaping holes in the plot. Hopefully the team at Honest Trailers will give it a once over soon!

What got me really interested when looking into it more for this review, was that it was written directed by the guys behind Crazy, Stupid, Love, and I Love You Phillip Morris, both films I love, and they also wrote the awesome R Rated film Bad Santa. So to me that’s some pretty fine pedigree of filmmaking and storytelling, so maybe the film was as smart as it was trying to be? End of the day it was a fun film with many twists and turns, and well worth checking out.