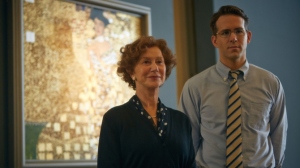 I loves me a bit of true life big screen entertainment, be it a documentary, biopic, or just any narrative film based on true events. So when looking for something to watch for my most recent date night with my girlfriend, I decided to go with Woman In Gold, which I knew nothing about. I knew it had something to do with World War 2, and the Nazi’s, and I actually thought maybe it was a thriller with Helen Mirren paying a devilishly evil ex Nazi now in hiding. Well, boy was I wrong, and I was also in for a nice surprise with it being a true story.

One of the reasons I love true stories so much is the fact they often tell you a story about something you previously knew nothing about, which is exactly what this story was. Sure I knew about the bigger issue of stolen art works during World War 2, and any war for that matter, but I never knew about this very specific case for a few very expensive paintings. The story itself lacked in a few areas, though I’m sure that was to do with the rather protracted timeline the film covered, especially once they started to go through the process of getting the paintings back.

The acting was solid, though there were a few flat spots that they seemed to struggle through, but overall I really did enjoy the film. It’s not exactly one I’ll go back and see anytime soon, but for history buffs, art lovers, and those wanting a nice heart-warming story to put a smile on your face, then this is one I’d highly recommend.