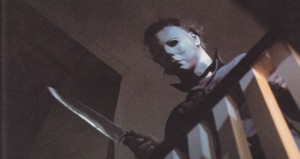 When it comes to classic 70’s and 80’s horror films, I’m a Texas Chainsaw Massacre and Nightmare on Elm Street kind of guy, whereas the Friday the 13th and Halloween movies never really got me interested.

In fact, it wasn’t until I watched Halloween recently that I realised I’d either only ever seen small parts of it over the years, or it was such a long time ago since I saw it, that only some scenes stuck in my memory. But I do like the old classic horrors, and in many ways they are a lot better than their flashy modern remakes.

“15 years ago, 6 year old Michael Myers brutally killed his older sister. The silent child was incarcerated in the Smith’s Grove Sanatorium under the care of psychiatrist Sam Loomis. The town of Haddonfield had slowly begun to forget the tragic crime, until Loomis returned to the town to warn of Myers’ escape from Smith’s Grove. With Michael set on killing a group of high school students, Loomis seeks the help of the hesitant town sheriff to stop him before it’s too late.”

My first impression of the film was that it was slow, boring, badly acted and directed, and even though I know it was shot on a small budget, it just felt a bit cheap even for its late 70’s style. However, it wasn’t until I started watching it again with the commentary on that I started to see what all the fuss was about.

Everything about this film was ‘Hitchcockian’, with its slow style which built tension. During the second watch this was much more apparent. In fact I wonder if my modern day viewing of flashy effects and fast paced horrors skewed my initial feelings.

Either way, now that I’ve seen it twice, back to back, I can see it for the classic film it is and how it inspired the whole splatter film horror craze that followed in its wake.