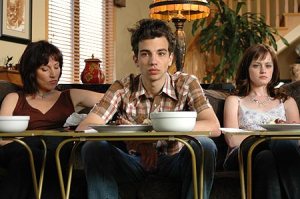 I’m Reed Fish is a movie that normally I would have easily passed over as it looked like a very small film, but with the up and coming star Jay Baruchel (Tropic Thunder, She’s Out of My League, How To Train Your Dragon) on the cover, I decided to give it a go.

I went into watching the film not knowing a single thing about it other than it also seemed to co-star Alexis Bledel from Gilmour Girls fame. However, after seeing the film, I learnt that appearances can be deceiving.

With Alexis on the cover, I assumed she would be the co-star and love interest of Jay’s character, which she kind of was, but without spoiling the film I can tell you that at the end of the day she was almost 3rd fiddle to other female characters.

This surprised me for a number of reasons, one being that why would a ‘biggish’ name take such a role, and two, why use her so heavily in the marketing? Well question number two is an easy one to answer as she would help sell the film regardless of how big her part in it is, but question one is still a funny one for me as I can’t see what she saw in taking on a role that technically wasn’t that important.

Other than that there was an interesting twist in the film, which funnily enough was revealed half way through the movie, and with some quirky characters and performances it made for an enjoyable film.