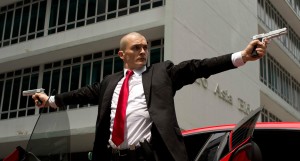 Computer game adaption’s into films are a dime a dozen these days, and have been for two decades. Though what’s much rarer than actual adaption’s, is good ones. For every Mortal Kombat and Resident Evil 3, there are a pile of other shitty ones that are pumped out to try and make a buck. Back in 2007, a film adaption for the game series Hitman came out. Now, I had never played the series, but I knew of it, but either way that didn’t stop it being a pretty average and disappointing film. So mark that one down to the pile of shit that gets pumped out.

Cut to 2015, a full 8 years later, and they decided it was time to put out another Hitman film, though this one was to be stand alone, and not a direct sequel to the first one, even though it was also written by one of the original writers of that film. Now, I’m not 100 percent sure where I had heard this, but whispers had come through that this was actually a pretty good film, so with that in mind, I was looking forward to seeing it, though not exactly amped.

Sadly though, this wasn’t really much of a step up from the original film, though it’s hard for me to remember that film well enough to judge this one as a step down either. All I know is I was bored by the action mostly, and the convoluted and confusing storyline just annoyed me, as it felt like it was written with no semblance of it needing to make certain scenes make sense, and instead created for the exact purpose required for that particular scene. So though not a terrible film, it just wasn’t great either.